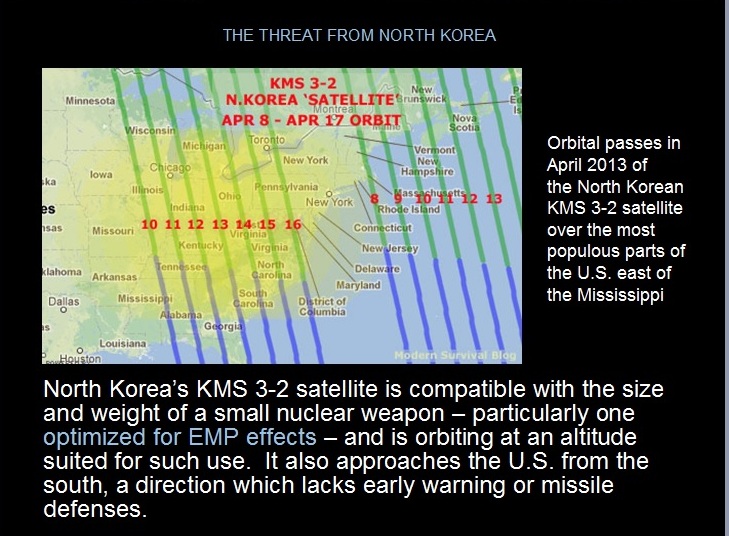 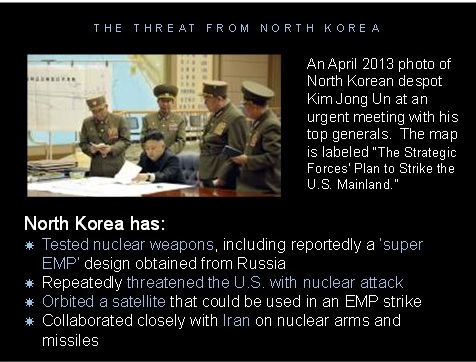 The design characteristics of a Super-EMP warhead are such that it would  likely be small enough for delivery by North Korea’s Unha-3 space launch vehicle  or its Taepodong-2 ICBM.

North Korea during its December 12, 2012 launch of the KSM-3 satellite  apparently practiced making against the U.S. a surprise nuclear EMP  attack.  During the Cold War, the Soviet Union developed a secret  weapon–the Fractional Orbital Bombardment System (FOBS)–disguised as a  peaceful space launch vehicle, that could orbit a nuclear warhead like a  satellite, to make a surprise EMP attack.

The FOBS would launch southward, away from the U.S., and orbit a nuclear  warhead on a satellite trajectory over the South Pole, attacking the U.S. from  the south.  During the Cold War and today, U.S. Ballistic Missile Early  Warning Radars and anti-missile interceptors are all looking north.  U.S.  National Missile Defenses are blind to the south and not prepared for an attack  from that direction.

The first warning of a FOBS attack would be the nuclear EMP burst which could  paralyze military communications and forces and would have catastrophic  consequences for the electric grid and other civilian critical  infrastructures.  The Congressional EMP Commission assesses that a nuclear  EMP attack that causes a protracted nationwide blackout lasting a year or more  could kill up to 9 of 10 Americans from starvation, disease, and societal  collapse. 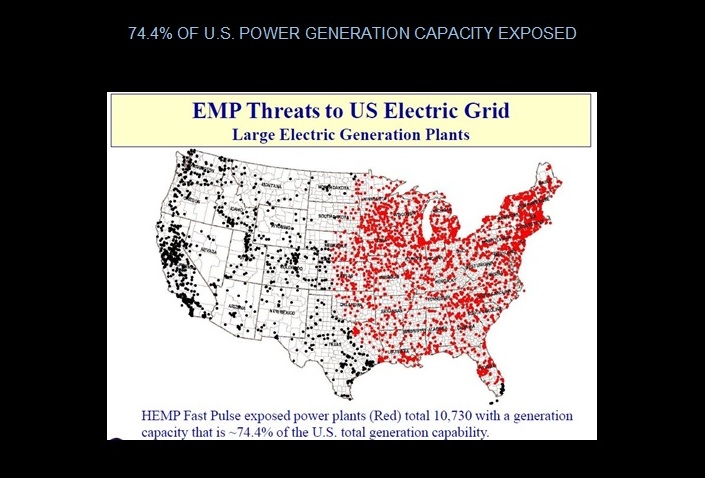 The trajectory of North Korea’s KSM-3 satellite had the characteristics for  delivery by FOBS of a surprise nuclear EMP attack against the United    States.  The satellite was launched to the south, away from the U.S.,  transited the South Pole, and approached the U.S. from its southern  blindside–at the optimum altitude for placing an EMP field over all 48  contiguous United States.

President Obama, despite public dismissal of the North Korean nuclear missile  threats, nonetheless conducted B-2 bomber demonstrations over the demilitarized  zone and strengthened National Missile Defenses (but not in the  south).

Amidst the nuclear crisis with North  Korea, on April 10, 2013, the KSM-3  satellite was near the geographic center of the U.S., at optimum altitude (if  KSM-3 was a nuclear weapon) for placing an EMP field over most of the  continental United   States.

On April 16, 2013, the KSM-3 satellite was over the Washington, D.C.-New York  City corridor–the optimum location and altitude for placing a peak EMP field  over the area most likely to blackout the Eastern Grid.  The Eastern Grid  generates 75 percent of U.S. electricity and is indispensable to national  survival.  The peak EMP field would also have maximized damage to  Washington and New York, the nation’s political and economic centers.

Perhaps coincidentally, perhaps not, on April 16, 2013, on the same day North  Korea’s KSM-3 was over Washington and New York, saboteurs unknown attacked the  critically important Metcalf transformer substation outside San Jose, that  services a 470 megawatt power plant and the Silicon  Valley.  Had the  attack on Metcalf destroyed the transformers, cascading failures might well have  blacked out much of the Western Grid.  U.S. military operations in the  Pacific, and against North Korea in a major war, depend upon West coast power  projection capabilities.

Power projection to the Pacific and Asia cannot be sustained if the Western  Grid is in blackout.

Three months after Metcalf and the KSM-3 orbit over Washington-New York City,  a North Korean freighter that transited the Gulf of Mexico was intercepted  trying to enter the Panama Canal carrying, hidden in its hold under bags of  sugar, two nuclear-capable SA-2 missiles on their launchers.  The missiles  had no nuclear warheads.  But North Korea’s demonstrated capability to move  nuclear capable missiles into the Gulf of Mexico is eerily similar to the EMP  Commission’s nightmare scenario of a rogue state launching a nuclear EMP attack  from a freighter operating off the U.S. coast.

An EMP attack launched from a freighter near the U.S. coast could achieve  surprise, minimize the possibility of interception, and be executed anonymously  to escape retaliation.  Deterrence and retaliation depends upon knowing who  executed the attack.

The nuclear crisis of 2013 may have been an elaborate training exercise by  North Korea for an all-out Cyber Warfare Operation against the United  States.  The Congressional EMP Commission found, and as explained in May  2013 congressional testimony of former CIA Director R. James Woolsey, in the  military doctrines of Russia, China, Iran and North Korea, Cyber Warfare is not  limited to computer viruses and hacking–but includes sabotage, like the Metcalf  attack, and nuclear EMP attack.  The objective is to destroy the enemy by  collapsing the civilian critical infrastructures–communications,  transportation, banking and finance, food and water–and especially the electric  grid, which sustains all the infrastructures, and modern civilization.

All the elements of a total Cyber Warfare Operation were present.  Every  day the electric grid and other critical infrastructures experience hundreds of  attacks and probes by computer viruses and hacking.  The Metcalf attack on  April 16 may have been practice for a much larger and more ambitious sabotage  campaign against the electric grid, as Jon Wellinghoff, former Chairman of the  U.S. Federal Energy Regulatory Commission, and many experts believe.  The  April 16 orbit of KSM-3 over Washington and New York, in the perfect position  for an EMP attack on the Eastern Grid, is an astounding coincidence, if it is a  coincidence.  Three months later, the presence in the Gulf of Mexico of a  North Korean freighter carrying nuclear capable SA-2 missiles completes the  picture, and checks all the boxes for an all-out Cyber Warfare Operation. 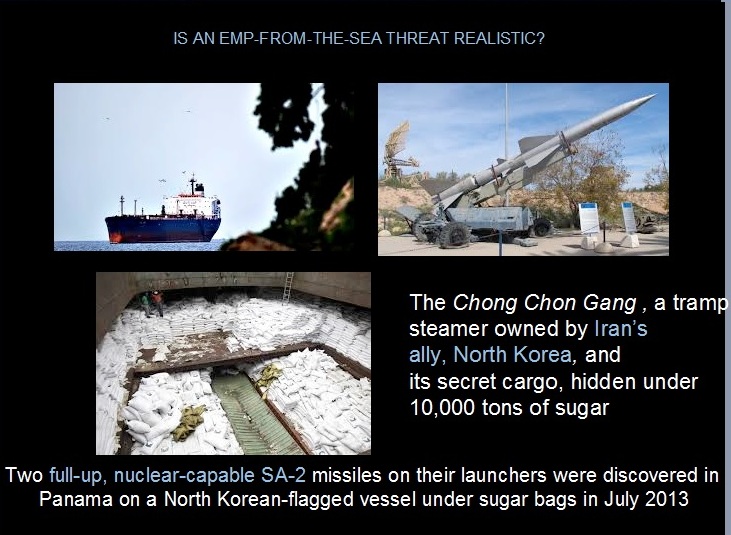 What is to be done?

Former Director of Central Intelligence Woolsey and I have written in the  Wall Street Journal that it is too risky to tolerate North Korean launches of  their Unha-3 space launch vehicle or their Taepondong-2 ICBM–we should blow  them up on the pad in a surgical strike.

During President George W. Bush’s Administration, former Secretary of Defense  William Perry and Ashton Carter, until recently President Obama’s Deputy  Secretary of Defense, both advocated such a policy.  They urged President  Bush to surgically destroy North Korean long-range missiles under  development–because it would be too dangerous to allow North Korea the  capability to deliver a nuclear weapon against the United States.

Now that North Korea has Super-EMP weapons, and the capability to deliver  them, preventing their launch of  weapons or “satellites” over the United    States is even more imperative.

More important than ever, vital to national survival, is protecting the  electric grid from EMP and the other elements of an all-out Cyber Warfare  Operation.  Bills enjoying strong bipartisan support are before Congress  designed to protect the grid–the GRID Act, the SHIELD Act, and the Critical  Infrastructures Protection Act.  But these have been stalled, blocked from  a vote, by lobbying from the electric power industry, especially the North  American Electric Reliability Corporation.

State initiatives to protect the grid from EMP and other threats have been  more successful and appear to be a promising way to achieve progress.   Maine and Virginia have already passed initiatives to study protecting their  State grids.  Florida, New York, New Mexico, Utah, Oklahoma and Indiana  have movements afoot to introduce grid protection initiatives, instead of  waiting for Washington to act.

Finally, Ambassador Henry Cooper, former Director of the Strategic Defense  Initiative, has excellent ideas about how we can quickly bolster National  Missile Defense with Aegis cruisers and Aegis ashore interceptors to patch the  holes in our defenses–especially to the south.  Ambassador Cooper is our  nation’s foremost expert on missile defense.  During the Cold War he was  deeply involved in efforts to protect our military forces from EMP.